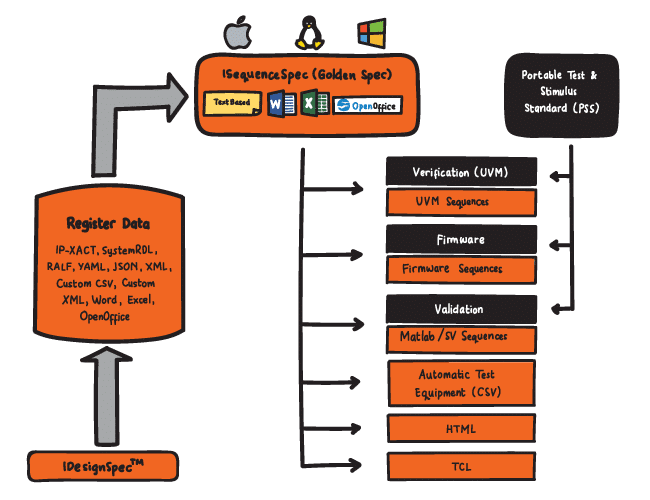 A common Sequence specification serves as a powerful tool for stimulus generation used by multiple teams involved in verification, firmware and post-silicon validation stages. But most SoC teams lack a unified flow for creating sequences – each team has to manually write sequences in their formats, thus wasting time and resources.

ISequenceSpec™ enables users to describe the configuration, programming and test sequences of a device and automatically generate sequences that are ready to use during early verification stages, firmware development and post-silicon validation. From a single sequence specification, you can generate UVM sequences for verification, C code for firmware and device driver development, SystemVerilog sequences for validation, and various outputs, including CSV for Automatic Test Equipment.

Sequences can be specified using a rich language and command feature set that includes loops, branch, wait, calls, switch, and macros. Several properties can also be defined for customizing the generated outputs. These properties can be created by using explicit property name-value pair or using the curly bracket syntax in the description.

Several semantic problems can occur during the development of a sequence. ISequenceSpec is equipped with a smart syntax and semantic checker for validating the format and syntax within the specification. The entire specification is validated, and a report containing a complete list of all problems opens in a window for viewing with cross-navigation to the row containing the problem. The checks carried out by the validation process include: